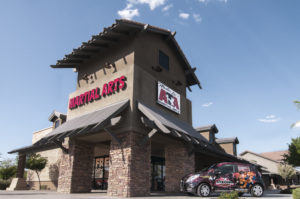 Michelle Landgren-Lee opened up the first Lee’s campus in 1986 in Tempe, Arizona. Since then, the Lee’s have opened the doors to 12 total training facilities and have developed a staff of 72 instructors, of which are some of the best martial artists in the state.  Now a Chief Master (8th degree black belt), Michelle Landgren-Lee holds 15 World Champion titles in the ATA and Mr. Anthony Landgren (5th Degree) 19 World Titles all while being dedicated parents as well as extremely talented instructors. The Lee’s campuses are just 10 of 28 Arizona licensed ATA locations.

The Landgren-Lees are proud of their long history of training the best students in Arizona. In fact, many of the Lee’s students have trained at the same location for over 25 years. Students that have trained as children have now grown up to have children of their own and have also enrolled them at Lee’s. Part of the magic of Lee’s ATA is the feeling of “family,” although courtesy, respect and discipline are required to keep a family together… the rewards are confidence, self defense, improved physical strength and agility and a great group of martial artists who can count on each other.

The ATA is the premier worldwide organization dedicated to the martial arts discipline of taekwondo, and is the founding organization of other international affiliates that include the World Traditional Taekwondo Union (WTTU) and the Songahm Taekwondo Federation (STF).  Counting both the U.S. and worldwide, our organizations have over 1,500 independently owned and operated licensed schools and clubs, and have registered over one million students since the ATA’s inception in 1969. Each ATA instructor is a graduate of an instructor program that represents more than thirty years of research and development. He or she will be with you every step of the way to help you reach your individual goals (and maybe even reach some new goals you never before thought possible).

What is Songahm Taekwondo?

“Martial Art” is a broad term encompassing the many styles of physical discipline (fighting) arts that have been developed over the centuries. To say that the style of Songahm Taekwondo is just another “martial art” would be an oversimplified explanation of the world’s largest centrally administered martial art. This system of teaching and training is unequaled in the martial arts community.

From 1983 to 1990, Eternal Grand Master introduced the eighteen Songahm forms. These forms are part of a fully-integrated curriculum, in which everything a student learns reinforces everything else. The forms contain all or nearly all of the techniques that students are expected to know at each rank and all of these patterns lead logically to the movements required for each succeeding rank. Songahm Taekwondo also focuses on personal development of the mind and body. To say it is just self-defense would be to lose most of the valuable ideas and philosophy behind this ancient art.