Mr. Erik Goetze is the Chief Instructor at Lee’s ATA Martial Arts- South Scottsdale Campus. See Lee’s S. Scottsdale
He has also previously managed our Laveen Campus as well as another ATA school in Tucson. He is an esteemed instructor and brings great value to the team here at Lee’s. Mr. Goetze is our featured instructor for this post and his Q & A responses are sure to leave you with a new perspective and higher regard for the instruction available to you at the South Scottsdale location.

Q: Please list your rank, certifications & titles as well as your non-tkd achievements.

I am currently a 4th degree black belt, and am amazed to have made it this far. I am a certified level 3 instructor. I am a level 3 tournament judge and a just earned my level 1 tournament weapon judging chevron. I am certified in single Ssahng Jeol Bong, Double Ssahng Jeol Bong, Single Bahng Mahng Ee, Gum Do sword level 1, mid range Jahng Bong, long range Jahng Bong, single combat Bahng Mahng Ee, and Integrated Martial Arts. But, I really think that I’ve got a lot to learn about each of these. I was the Arizona State champion in Forms, Weapons, and Sparring in 2006 and the Arizona State Champion in Forms in 2008.

My non-TKD achievements are varied, if not particularly grande. I have a Bachelor’s Degree in International Relations from Michigan State University, and a Master’s Degree in Theology from Emory University. Its hard to keep quiet when you spend seven years studying religion and politics. I earned my Eagle Scout in 1984. I served as a Military Intelligence officer in the US Army Reserve for eight years and am a Veteran of the Persian Gulf War. I also did a bunch of counter-narcotics work with the Joint Task Force 4 and was honorably discharged as a Captian in 1996.

Q: Tell us a fun fact about yourself!

I can’t really limit myself to one “fun fact”. I’ve been a vegetarian for 30 years, but since I’m not a vegan there’s way too much pizza, pasta, and desserts in my diet. I’ve gotta work on that. I’ve lived in New Jersey, Virginia, Florida, Michigan, Georgia, Texas, North Carolina, and Arizona. It took 50 years to get to all those places. I like to read biographies and autobiographies, hike, drive, and watch movies.

Q: What inspired you to join the ATA?

For reasons which escape me now, I took a course in Taekwondo at Michigan State University in 1985 as an elective. I learned 2 forms which I don’t remember now and never earned any belts because I didn’t pay for either graduation offered in the class. For the next 18 years I held a thought that doing martial arts might be a good idea again someday. It wasn’t until 2003 that I came back to martial arts at age 37. I moved from North Carolina to Arizona in 2003. During a visit to Arizona Mills Mall for some clothes shopping shortly after the move I found Senior Master Landgren Lee at her kiosk. The universe just pulled me over there and I paid her $20 to try the program for a month. Three years later, before earning my second degree Black Belt and turning 40, I decided that this is what I wanted to do when I grew up.

Q: What has kept you consistently training for so long? About how long?

I’ve been training for 14 years now.

First, it is the community. Everyone I know in Taekwondo is amazing in that they are each flawed and beautiful in some way, or several ways. The people I’ve been honored to know for these 14 years, an

d even those who I only knew briefly at some point on this journey, are an extended family to me. From the students and parents with whom I interact each day, to the students and parents who I’ve seen come and go over the years, to the co-workers and peers I see and exercise with weekly, to the martial artists I see a few times a year who are all over the United States, there is a true sense of community. The community has its ups and downs and certainly isn’t perfect, but it is a very meaningful connection for me.

Second, it is the “art” of this martial art. I appreciate the depth of what we teach and learn. We do not just kick and punch. We teach life skills that transcend any religious tradition and can significantly change lives and society for the better, without being sectarian and divisive. I believe that the discipline, courtesy, loyalty, confidence, perseverance, personal victory, self-esteem, honor, respect, goal setting, self-control, and integrity, are at the core of how the ATA tries to change lives. While self-defense is an important component of what we teach, I believe that the ATA is so much more than learning how to fight.

Third, this is so good for me personally. I love the fact that there is always more to learn. I love to compete with my friends at tournaments. I love that what I do for a living encourages me to be a better person each day. I love doing traditional forms. It is a way to put my mind, body, and spirit in the present moment, one move at a time.

Q: Out of your entire Taekwondo journey, what has been the most exciting/rewarding event?

It was such a wonderful experience to complete the Quest for Mastership with Senior Master Landgren Lee, a great accountability partner, and a group of peers

Q: What are your hopes for the families in South Scottsdale?

My most fervent hope is that the families in South Scottsdale find this school to be a safe and nurturing place that pushes them and helps them be better people, in whatever areas are the most important to them individually: self-confidence, self-discipline, fitness, self-defense, etc. I hope to watch these students, regardless of age, become more responsible, honorable, respectful, and capable of handling what life throws at them. Lee’s South Scottsdale Campus 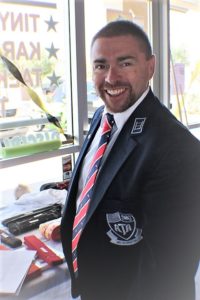 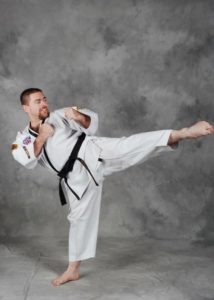 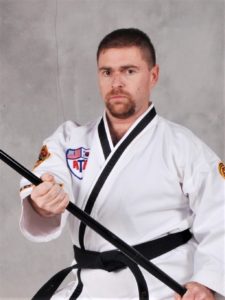