June 26, 2017Leave a commentUncategorizedBy Team Member
Day one of competition for ATA Arizona was a huge success! For Arizona, World championships means world-class sportsmanship, and that was seen through comaraderie during winning and consolation during tears.
Some black belts competing at their first Tournament of Champions (TOC) discovered the intense emotion that can come up when things don’t go as hoped. But without delay, encouragement came from instructors and fellow competitors – being the best YOU, is the best you can be.
One could see the wisdom that comes with experience in the ever positive attitudes and beaming smiles of Mr. Justin Small and Mr. Jordan Peters, both of whom found personal wins within their losses.

It was my first time placing in Creative or XMA, and so I’m grateful for that, said Peters. 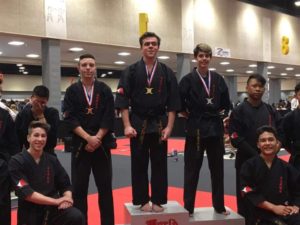 Brooks Kong-Sivert had the amazing experience of winning a 3 way tie for first in extreme weapons. Here’s his take on it…

J: Your face when they pointed to you…what was going through your mind?
B: I was in a state of shock. Did that just happen?
J: How many times have you competed in top 10?
B: Three times
J: What does this mean to you?
B: It means all the hard work I put in paid off. It’s a validation of all the time and effort my instructors put in and their belief in me. And to win in that group of very talented competitors means makes it mean even more.

– She is A Guest Blogger at Lee’s ATA and we appreciate her input.